The 24-year-old Savoyard rider, a professional since 2019, has signed up for the next two seasons with the Arkéa-Samsic team.

“Signing with Arkéa-Samsic marks a new start for me on the professional level. My goal will be to continue to progress over the next two years. I’m going to discover a new environment, new team-mates, a new staff, and I can’t wait. I have had a lot of discussions with Emmanuel Hubert, the team’s General Manager. I was immediately attracted by the sporting project he outlined for the Arkéa-Samsic team, which included me. He also explained to me that he liked my profile as a rider who knew how to take the initiative and was not afraid to raise his hand, always motivated. I let him know in return that I was ready to take up this new challenge he was offering me. Emmanuel Hubert told me that he was happy to accompany me for the next two seasons. My wishes on a sporting level are to return to my basic qualities: puncheur, but also to start working again on my speed in case of a small finish. Those which were simply mine in the amateur ranks. I would also like to discover events such as the Ardennes classics, with the mission to accompany my leaders as far as possible. I really enjoy making myself available for the team, but also taking my chances when I am given them”.

2021, 5th in the Perugia-Montalgino stage of the Giro d’Italia

2019, 1st in the best climber classification of the Tour d’Alsace 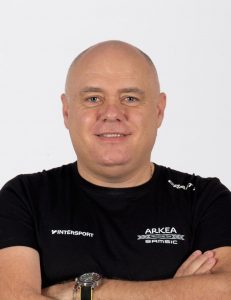 Emmanuel Hubert, General Manager
“Despite his young age, Simon Guglielmi already has a lot of experience in the professional ranks. At 23 years old he has competed in two Tours of Italy, with a prominent role alongside Arnaud Démare, in 2020, when he made his debut in a Grand Tour. He is also an attacker. This year, for his second experience on the Grand Tour in Italy, he finished 5th of a stage. Simon’s qualities are multiple: he blends in with the team and works without restraint for his leaders, but he is also capable of putting himself forward on an individual level by going forward in the breakaway. His good speed can also be an advantage in case of a small finish, just like his punch, which he wants to exploit again. I appreciated his frank and sincere speech, as well as the words he chose to explain his strong desire to join us. His motivation was evident in his words”.